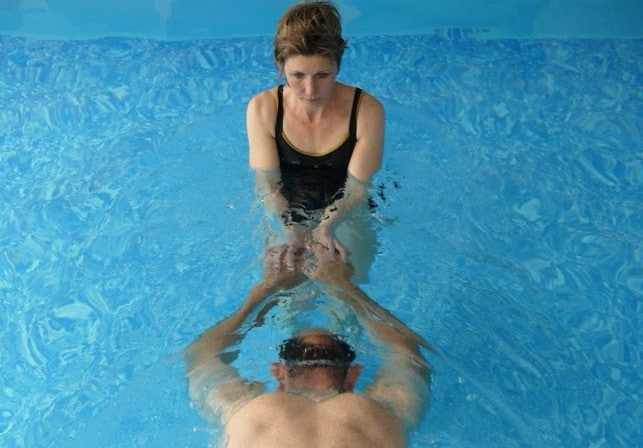 The importance of hands on guidance in teaching people to swim…

Touch reaches parts of the brain that words and images can’t.  Hands-on guidance may be as important for improvers as it is for non swimmers, who can’t do without it. Learners of strokes don’t always want too much – “… But you’re pulling me along”/ “Can I have a go on my own now?” –  so we tend not to do enough of it.

We’re trained to trust our intellect. We feel we should be able to communicate to another person,  with words and demonstrations,  how to carry out some simple physical act. And we’d like to be able to produce a new coordination pattern that someone explains or demonstrates to us.  But something can get lost in translation.

Almost all breaststroke learners find it difficult to rest their arms and glide as their legs kick, then use their hands,  still out in front, to support the breathing position by sculling, instead of pulling them back against the water before their face comes out.

Pulling the arms back (which is directly connected to tightening the neck)  is so deeply instinctive that people don’t know they’re doing it. If we don’t know we’re doing something, we’re going to keep on doing it, even though we know something isn’t working. The more times the unhelpful thing with the arms has put paid to the essential thing, which is the the dive or glide, the harder people try, next time, and the cycle of frustration continues. Trying, as Alexander Technique teacher Patrick Macdonald said,  reinforces what is already there… If at first you don’t succeed, don’t try the same thing again!…So people get stuck, especially when learning breaststroke.

This can be avoided with hands on guidance. The hands of a teacher can

– impart a sense of calmness and rest,  preventing the learner’s rushed,  panicky movements.

–  give a sense of direction,  while keeping the learner moving forward through the water.

–  set up the experience for the learner of the successful coordination and timing of a movement.

Gently guiding a learner’s hands forwards, it’s quite easy to convey a message that a breaststroke kick should happen ‘now’, at the setup of the glide, for example.

Often the learner will produce and experience a decent stroke before they’ve properly understood what’s going on.  At this point,  they might say,  ‘But you’re pulling me along’ or ‘Can I have a go on my own?’  This is where we have to be careful because it’s where the good work may get lost and forgotten. Lots of guided repetition of the new pattern is needed in order to counter and overcome the deeply ingrained unhelpful patterns. The teacher needs to be resolute about this.

Hands-on guidance cuts through our tendency to overthink things and get in our own way. It gives us a new experience which our brain can process later.

It works,  better than words and demonstrations. As a learner you don’t always want too much of it because you want to have a go and work it out for yourself. But it seems the best way of guaranteeing more positive than negative experiences at the learning stage.

I Am Not A Swimming Instructor In ""

It was so different from earlier experiences with someone shouting from the poolside, fully dressed and bone dry while I struggled in the water, usually getting nowhere.
October 2013