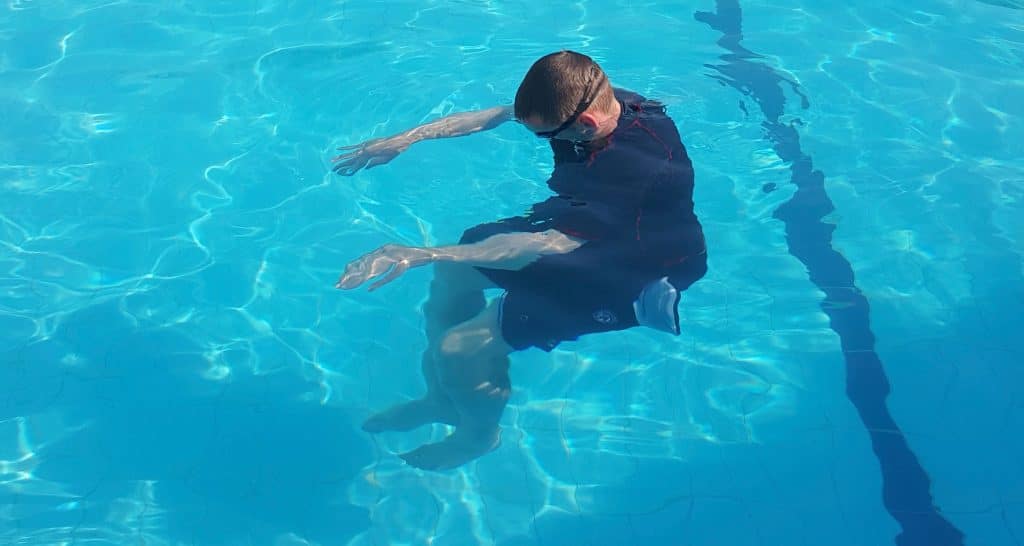 Learning to swim is all in the basics.

The less you do in water, the easier it is to change your reaction to it, especially at the learning stage. As teachers we have to be careful about rushing learners into swimming the strokes.

Lucy came to Wales this week with what she believed to be a deep seated fear of water and an inherent difficulty with swimming. She’d recently learnt to swim but lots of lessons hadn’t stopped her being afraid.

In 6 lessons we didn’t do a lot of ‘swimming’. But she went back to London loving being in the water because we re-educated her in the basics.

All the essential water skills, covered only superficially in previous  swimming lessons, needed to be rethought and experienced in a new way.

She could breathe out with her face in water, the first thing we looked at, but she was overdoing it, ‘blowing bubbles’ so forcefully she felt she was running out of air after a few seconds. She could float but she achieved this with heaps of unnecessary tension – taking a deep breath, bracing herself, spreading herself out across the surface – trying to hold herself up.

She could float on her back but not, she thought, without sticking her chin and chest up, squeezing her arms into her sides and kicking her legs ferociously.

She didn’t know that by allowing herself to sink into the support of the water, she would float effortlessly. She didn’t need a lot of persuading but really did need to think about it. By overdoing it, as she had been, her fear was never going to relinquish its grip.

So her previous learning of the basic skills hadn’t helped change her relationship with the water. She carried them out with the idea that she really had to ‘do’ something to succeed. And she’d been moved on to trying to swim without experiencing any ease in the water.

But she’d learnt names for the skills! For example, we adapted ‘The Rocket’ (hyperextended arms, head and shoulders pulled tightly together, one hand gripping the top of the other, ‘1 2 3 PUSH! ‘ and suddenly all over in a rush of splash and waves) into a restful, flowing glide.

Her way of doing these basic skills had formed poor foundations for her attempts to swim strokes. She’d felt hopeless in her efforts to coordinate front crawl and breaststroke and assumed this was down to lack of natural ability. Really it was because she wasn’t relaxed enough to move. She hadn’t learnt to float and let air out freely. She’d thought it was all about learning to do something, and, despite trying hard, she wasn’t getting it.

When we did a bit of front crawl she was amazed it could feel so easy. But she was at her best in her performance of the most basic skills, wholesome activities in their own right. As she floated, glided and flutter kicked on front and back, let herself drop into an underwater sitting position and rotated from back to front, consistently able to regain her feet in a calm and balanced way, she looked and felt at one with the water.

Our job is to change a person’s relationship with the water and initially this doesn’t come from swimming, it comes from doing nothing, floating, being.

A more holistic approach, with an understanding that a pool is the perfect place to practise non-doing.

Video shows Rachel who came to us for our course of 8 lessons as an anxious non-swimmer, afraid to put her face in the water.

Thanks for a very interesting week of non-swimming. It was most enjoyable. I couldn’t wait to get back in the pool again when I got back. I have to say I was extremely surprised that I was able to hang like a jelly fish with my head looking at my feet and then to regain my feet on the floor without too much effort. This was even without anything in front of me to potentially hang onto! So well done you two! I am now much more relaxed in the water and will keep on working on floating.
December 2019