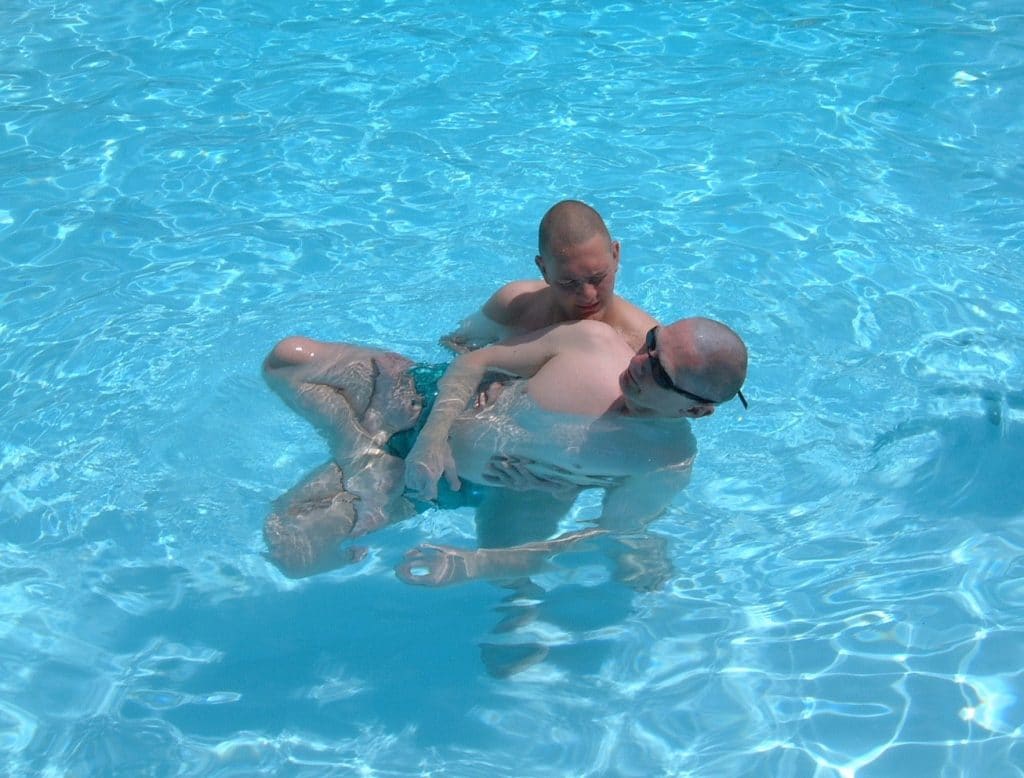 How to make a sinker lighter…

“Don’t relax on me,” a senior Alexander Technique teacher used to tell me. My idea of relaxing made me stiff and heavy and this isn’t what he wanted. He was encouraging me to be light, expansive, to go up against gravity and take the work out of standing still.

Stuart came for 6 lessons with Cheryl and me this week, to learn front crawl. He could only do a few strokes because he wasn’t relaxed and didn’t know how to breathe. When we asked him to float face down, to explore his own buoyancy, he sank to the bottom of the pool. When he tried to swim on his back without lifting his head, his face was a foot underwater after a few seconds.

As I put my hands on his neck and under his shoulders to help him swim on his back, I could feel lots of muscle tension. He was pulling his shoulder blades together and making himself heavy. Tensing up to try and stop himself sinking was causing him to sink more. Telling him to relax wasn’t going to help because, like me trying to learn the Alexander Technique, his idea of relaxing made him heavier.

If relaxing wasn’t going to work, what else could we do? How were we going to get Stuart to lighten up, get better connected with the water, flow through it?

He needed to learn to direct himself. We started by standing in the water, his arms resting out in front of him under the surface, pointing to the end of the pool. By sending his elbows away from his shoulders and fingertips away from elbows, his arms became lighter and he could feel energy flowing through them. Energy which was created by thinking, not by stretching or doing anything.

On realising he was able to bring about this change in his arms, he began to think about the whole of himself in the same way. He directed his head out of his body, his shoulders away from each other and his knees away from his back. And his swimming soon started to change.

Before the lessons, Stuart had been forcefully blowing air out. This was part of a whole pattern of over-doing and contributed to his sinking. I asked him to try not ‘doing’ the breathing and to see whether, if he just directed his head out and his back to open, air would come out on its own. It did, with a constant stream of small bubbles.

After 5 lessons, he was swimming on his back without sinking, gliding through the water in front crawl and rotating for a relaxed in-breath.

Stuart looks relaxed now. He feels relaxed. But he hasn’t achieved this by relaxing. Because tension was making him stiff and heavy, he needed to learn direction. And that’s what’s making him a confident swimmer.

Thanks for the excellent guidance on how to relax in the water. A long weekend with you guys has helped me enormously. I hope to return soon to develop my swimming without stress. Loved it.
April, 2018