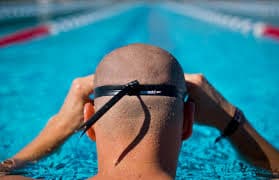 Last Saturday I had a terrible swim. I hadn’t tested myself against the clock for a while.

‘Shall we do some interval training?’ I suggested to my well balanced friend.

‘Let’s not use the clock,’ he responded wisely.

But my plan was to use the clock, just as a tool to measure, objectively, the times of each 100 metre swim.

Swimming against the clock. Keeping an eye on, racing, that red needle.

Losing my feel for the water. Doing. Trying…

I used to like interval training, 20 years ago. I could do quite respectable times then. But in the long run, I don’t think it did me much good. I was blind to the stupid things I was doing as I bounced off the walls and recorded my splits.

Steven Shaw, who told me the spirit of swimming had been ‘hijacked’ by competitive sport, and other Alexander teachers, made me see the possibility of another way. A way of using the water for something quite different from competitive sport. You don’t need to be a talented athlete to enjoy the water. Anyone can learn to swim well, with grace and ease.

But as someone who’s done a lot of fitness swimming in the past, I’m tainted by an interest in times. I sometimes forget it’s a fallacy to fight the water.

It’s easy for me to point out to pupils the need first and foremost to enjoy the support of the water. For non-swimmers it’s fruitless to try and get from A to B before being able to float properly, by doing nothing.

For the last five days I’ve worked with a very good pupil, in her seventies. She happily spent five lessons working on floating and gliding, and really got it. She realised there was nothing she could do to make herself float. But giving herself up, to the water, led to a new experience she hadn’t imagined possible.

So this Saturday morning I entered an empty lane in my local pool with a clear plan. I glided for a bit then I swam, easily, for 45 minutes. In crawl I worked on feeling the water behind my hand and forearm and then not ‘doing’ the pull with my arms but using the rotation of my body. In breaststroke I inhaled slowly through my nose. In backstroke I let my arms float up out of the water. I knew where the pace clock was but didn’t look at it. I don’t know how many lengths I swam.

But when the normal clock marked the end of the session, I was disappointed it was time to get out.

I just wanted to say a really big thank you for this week. It has given me water skills I’ve never had and didn’t think I could have. Also ways to carry on learning and practising them on my own. You were both so intuitive as teachers, it was really great.
December 2018