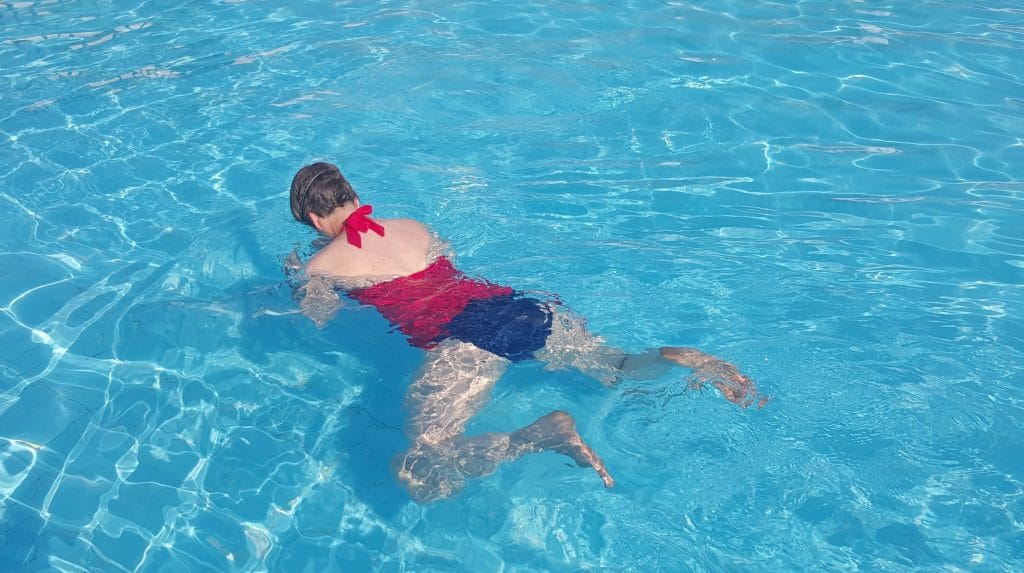 When we get a new skill for the first time, we may be greedy to repeat the experience.

Because we’ve managed it once, we expect to be able to ‘just do it,’ again, right away. But we tend to forget what we said to ourselves to make it work, so we can’t reproduce it. It’s the thinking, not the doing, that we need to repeat. But we don’t give our brain the credit it deserves.

For illustration, here are two key skills for learning to swim, both demanding because they’re counterintuitive, and the essential guiding thoughts for them:

Skill: Rotating to regain the feet properly from floating face down, instead of pulling the head out too early and losing balance

Thought: “Look for your knees.’

Skill: Finishing a breaststroke arm cycle with hands resting out in front in a glide, instead of pulling them straight back before they’ve finished going forward

Thought: ‘Glide till your hands touch the wall.’

When our kids were at primary school, we took them to visit a neuro-developmental learning efficiency practitioner. He gave them exercises to improve balance, coordination and learning. We had one rule to observe when practising the exercises: ‘3 strikes and you’re out!’ If you don’t get it in 3 goes, you need to leave it and come back to it later.

On the other hand, execution of a skill three times in a row seems to show we’ve got it.

When learning to swim, three times in a row could mean performing one complete stroke cycle, stopping and repeating the process twice. Or it could mean putting three consecutive strokes together. But it’s useful at the learning stage to stop at three, to quit while we’re ahead, so our brain can register and process successful new movement patterns. If we keep going for too long, our brain gets confused, our coordination goes to pot and the good work gets lost.

Sometimes three strokes is too many. After hands on guidance, learners will often do one very good stroke, then a mediocre one, then a bad one. The good one gets forgotten and there’s no register of success. It’s a missed opportunity.

So once might be enough when a skill is very new. Carry out one well organised, complete stroke cycle, regain the feet calmly and enjoy the sense of achievement. Then go and do something else.

During my Alexander Technique training I learnt from a physiology talk that something happens in the brain during the first few hours after a new movement pattern has been experienced. Words still floating about in my head from that day include ‘consolidation’ and ‘basal ganglia’. Anyway, I understood enough to explain why, after training in the morning, I often felt things had changed after an afternoon nap.

And I remember going for lessons with senior teacher Elisabeth Walker. The climax of the lesson would be one simple activity, a journey from standing to sitting and back again, as we watched the birds in her garden. The movement was transforming. We wouldn’t do it again.

We have to be happy with small achievements and see where they lead, over time.

Just wanted to thank you both for another great few days improving my swimming. You're both fantastic at providing gentle and consistent encouragement and advice. Like my last visit here I just want to get home and back to my local pool with your words still ringing in my ears.
March 2017