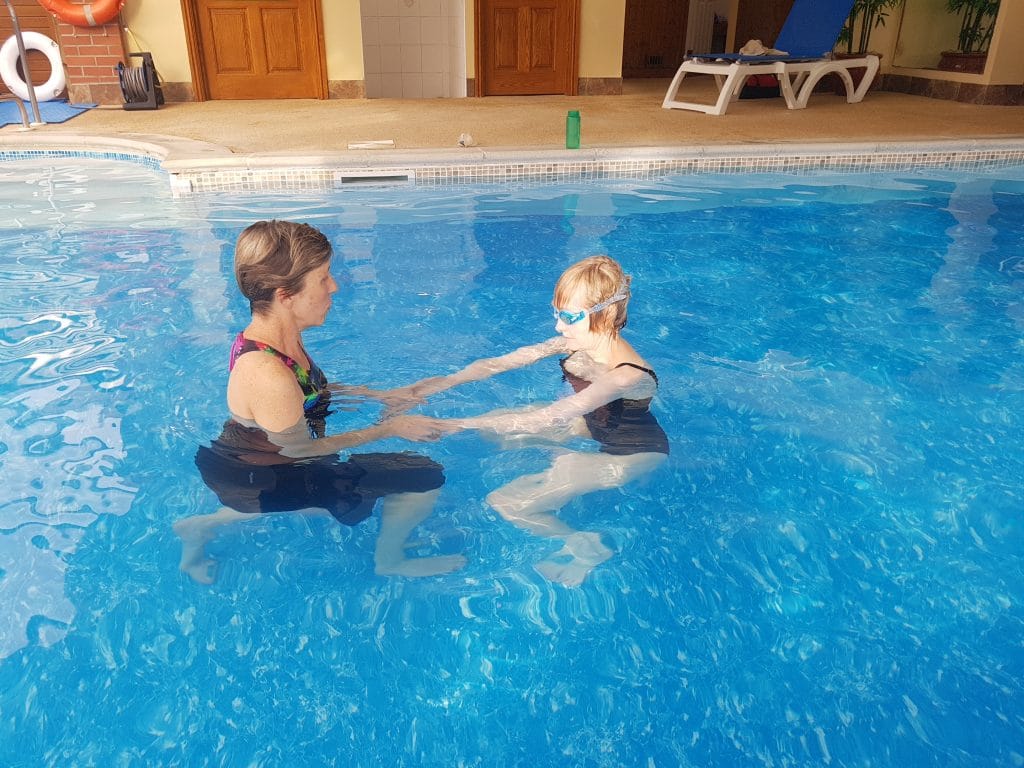 When learners first attempt to breathe out into water, nervous tension gets in the way. But relaxation and enjoyment are more easily experienced than they expect. And a surprisingly helpful resource can be a pupil’s own voice.

Breathing out, face underwater, is the first skill learners need. A relaxed neck and head will always result in improved breathing so it’s vital for everyone to learn this. But novices can’t explore head buoyancy until they’re comfortable breathing out with their face submerged. So I tend to start there, usually at the wall.

New pupils learning to breathe into the water are likely to be hindered by a sudden, involuntary tightening in the chest and throat. Momentarily they can’t breathe out and inadvertently they may inhale underwater. This is the panic reflex at work and we usually manage to subdue it, like a beast, in the first lesson. Being able to breathe out steadily is the thing which keeps it at bay. But initially it’s the dominance of the reflex that stops this from happening. After a bit of time, it gets the point that it isn’t needed in this situation and skulks off with its tail between its legs. Then we know we’re winning.

To show people how to make friends with water, I open my mouth and put my whole face in the water, without breathing out. This demonstrates that nothing happens if we don’t do anything; it’s just our reaction that causes a problem. When learners try this and nothing goes wrong for them, exhalation becomes more relaxed because they’re no longer doing it as a kind of defence against drowning.

‘Blowing bubbles’ is a commonly used term which may be better avoided as it gives the idea that air needs to be pushed out. Blowing shifts air explosively, from the top of the chest, so it runs out more quickly. ‘Making bubbles’ seems a better instruction.

For a deeper, calmer out-breath, singing often works well for learners. Using the voice is something everyone’s familiar with. Singing is a useful way to combat nervousness, engender confidence and get a bit of energy flowing.
Pupils can practise singing Ahhhh out of the water then think of doing exactly the same with the face in the water. Although the experience is different, what we’re actually doing is the same, so just focusing on making the sound is helpful.
I tell pupils that, on bringing our face out of the water, we should keep singing as our lips break the surface so that we breathe a little air into the atmosphere, which stimulates an in-breath. Closing the mouth before it breaks the surface tends to cause gasping. The in-breath should be passive. If we can hear it, it’s probably too strong.

Sometimes, with my hand on the back of their neck or the middle of their back, I sing into the water, together with my pupil. The sound of our two voices inspires confidence and helps tame the panic reflex. My own ease with the breathing, as someone who is comfortable in water, may transmit itself from my nervous system to theirs, via my hand.
This whole process can be seen in the above video clip of myself with Gill from ITV’s The Test in 2003. Where do the years go?
With a bit of time and attention, anyone can learn to breathe into water, just as anyone can sing. So it’s sad that so many people learn to swim with their head out of the water, which precludes relaxation.

I still don’t really think of myself as a ‘proper swimmer’, but thanks to Cheryl, I’m now a very confident floater! Facedown, drifting, totally relaxed, then off swishing and swooping, twisting and gliding under the water. Not lengths though. I don’t see the fun in that. Dolphins don’t swim lengths.
November 2019