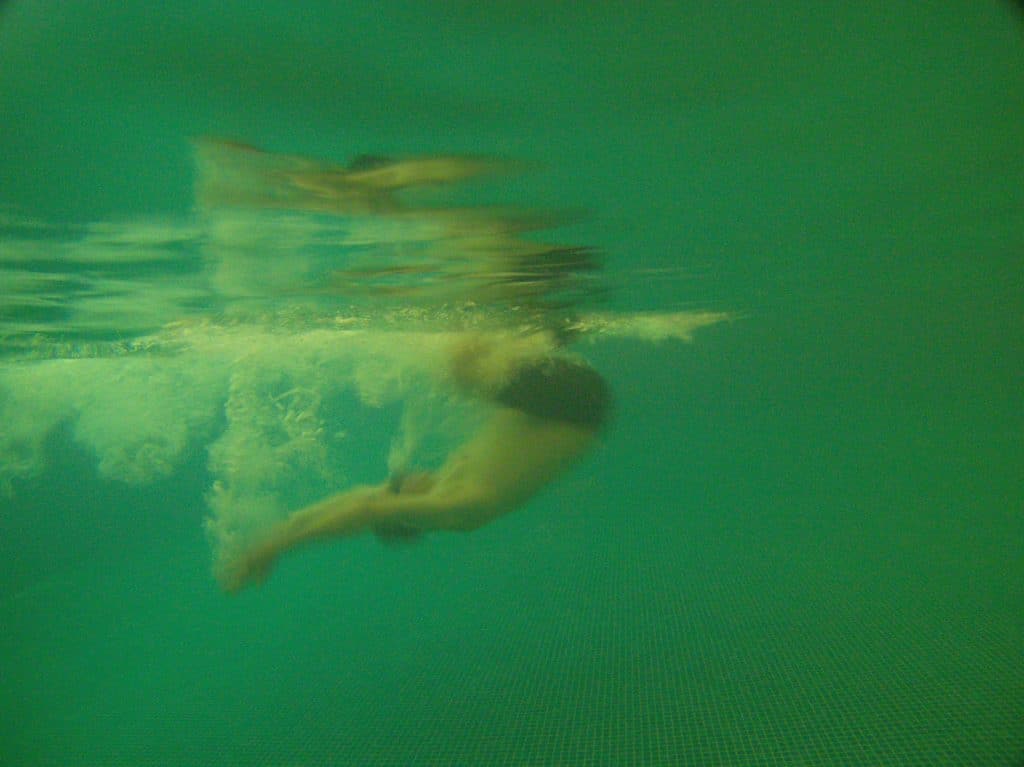 “The pool became an aquatic yoga or dance studio instead of a sports hall, gym or treadmill…I left the leisure centre feeling free and remained so for at least five minutes!….”

In man made swimming pools we swim up and down like floating sheep, perhaps trying to follow some advice to help our stroke technique, perhaps clueless as to what we’re actually doing, seldom really thinking for ourselves.

Steven Shaw has said that the spirit of swimming has been ‘hijacked’ by competitive sport. It’s down to us, individual recreational and fitness swimmers, to think about what we want from the water.

Even enlightened approaches to development of swimming technique like Shaw Method and Total Immersion can be turned into their opposites when we strive to get things right or to beright.

In the introduction to his latest book, Ultra-Efficient Freestyle, Terry Laughlin says, “TI freestyle is immediately and universally recognizable as a standard ‘form’—like yoga asanas. Every ‘signature’ element is there for a compelling reason.”

And there are lots of examples on YouTube of TI swimmers demonstrating qualities of grace, ease and oneness with the water. But the potential pitfall of swimming with a standard form is summed up by F.M. Alexander:

‘Don’t you see that if you get perfection today, you will be further away from perfection than you have ever been?’

Alexander taught that there’s no such thing as a right position – or form – only a right direction. It’s up to us as individuals to find that direction for ourselves. Copying other people and trying to fix ourselves into a certain pattern won’t get us going in the right direction because what really counts is what’s happening internally.

As we swim along our journey of discovery, we’re hindered the moment we fix into something we feel to be right.

But a swimming pool can be like a blank canvas. We can do whatever we like to move in any direction. Water supports our creativity with movement.

On my last visit to the pool, I got in the slow lane and found myself swimming a straight kilometre of front crawl, inhaling only through my nose. It made me much less likely to stiffen my neck and fully prevented gasping. I left the leisure centre feeling free and remained so for at least five minutes!… Breathing through my nose requires me to give up a lot of my front crawl habits. Consequently everything starts flowing. The pool becomes an aquatic yoga or dance studio instead of a sports hall, gym or treadmill.

Lane ropes are useful and there’s nothing worse than public sessions with no order. I want to be able to move in a straight line from one end of the pool to the other, without collision, and I guess most adults are the same. But children, left to their own devices, don’t swim lengths. They explore and play. Nothing is fixed. Adult recreational swimmers benefit from bringing these qualities to the pool.

So when I next go for a swim in a man made pool, I’d like to think of it as a chance to experiment, as aquatic movement practice instead of fitness training that needs to be done. That might be my best chance to develop my relationship with the water. Breaking out of the habitual and swimming free?

Just home from completing my lessons. I feel amazing with my new found confidence in the water. I began afraid of water and now see it as my supportive friend. I understand how to move with ease and comfort in the water, whilst doing my body no harm. And I can't wait to continue. I can't recommend Ian and Cheryl enough.
February 2019