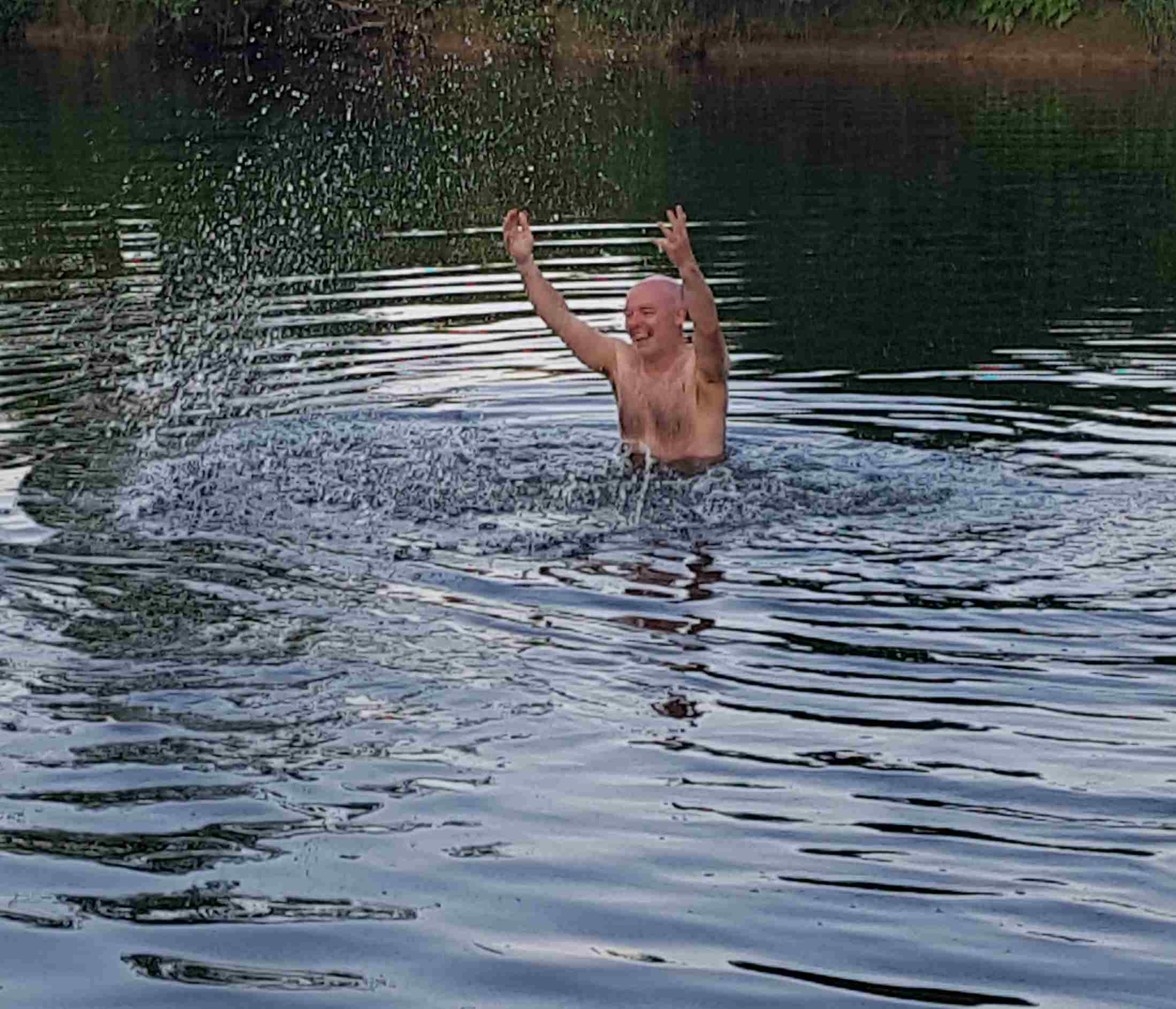 I had someone on the phone the other day, hoping for a guarantee that they’d be swimming (strokes) by the end of the week. ‘My husband is very goal oriented’, she told me. I suggested the water could be the one place he could work on not being like that.

If you don’t know what the process of learning to swim with the Alexander Technique involves, but you know you’ve tried to learn to swim before and it hasn’t worked, there isn’t much point in asking for guarantees. You need to keep an open mind and be prepared for something different.

Helping people to ‘overcome’ or ‘conquer’  fear of water has been my area of work for 24 years.  But it isn’t a term I like to use. Here’s why:

This suggests a struggle, a fight, a battle. There’s something you’re going to have to do. ‘Just do it.’ I’ve found this approach not to work. You have to stop fighting it. There is nothing to do. When you give up the idea that you have to do something, you’ll be happy. You do need courage, but the notion of conquering the problem puts you on the wrong track.

People like to think their ‘aquaphobia’ is their own unique problem, almost part of their identity. Maybe you had a bad experience as a child for example. But what we’re dealing with is universal. We’re all in the same boat. As human beings we have an inherent tendency to do too much in water. We can all learn to do less. That’s really all there is to it.

The first opportunity to explore this is putting your face in water. At first, fearful people tend to suck in water instead of letting air out. When this tendency ceases, it’s a beautiful and natural process. Something happens, something changes. The old reaction dissipates. I’m not doing something to make the change and neither is the pupil. It just happens. It always happens.

The concept of fear causes us to imagine the problem must be psychological, and needs to be approached primarily with psychology. For this reason, many people I’ve worked with have previously sought help from a hypnotherapist. In my view that’s never going to work. Because what we’re dealing with is likely to be more of a physiological than a psychological problem. Psychology does come into it of course but it is never the whole story.

Being in water excites our fear reflexes, until we learn to change our reaction. Fearful non-swimmers have often had difficulty learning to ride a bike, or struggled with heights, for example. It’s not so much fear ‘of’ water that we’re dealing with as fear ‘in’ water.

How can fear of water (‘aquaphobia’) really be a thing when we need water to survive, we started out floating in our mother’s womb and we’re all about 60 percent water.

Maybe ‘fear of swimming’ is more accurate. And maybe you’re justified in being afraid of swimming. The idea of learning to swim suggests a need for ability, to coordinate yourself, to do something to get somewhere. And if you’re afraid, you’re better off not worrying about any of that. Your job is to receive the support of the water and enjoy your time in it.  To be confident underwater, floating about and creating movement.

‘Conquer your fear of water’ might be a useful marketing slogan but it comes from the same kind of end – gaining thinking as ‘master your front crawl’.
Please share:

Make friends with the water’ is what you say....... I think I am falling in love with it ! What a difference ! Thank you so much for a lovely week, I feel euphoric and relaxed, the Alexander Technique of the swimming has rubbed off on the rest of my life.
April 2017