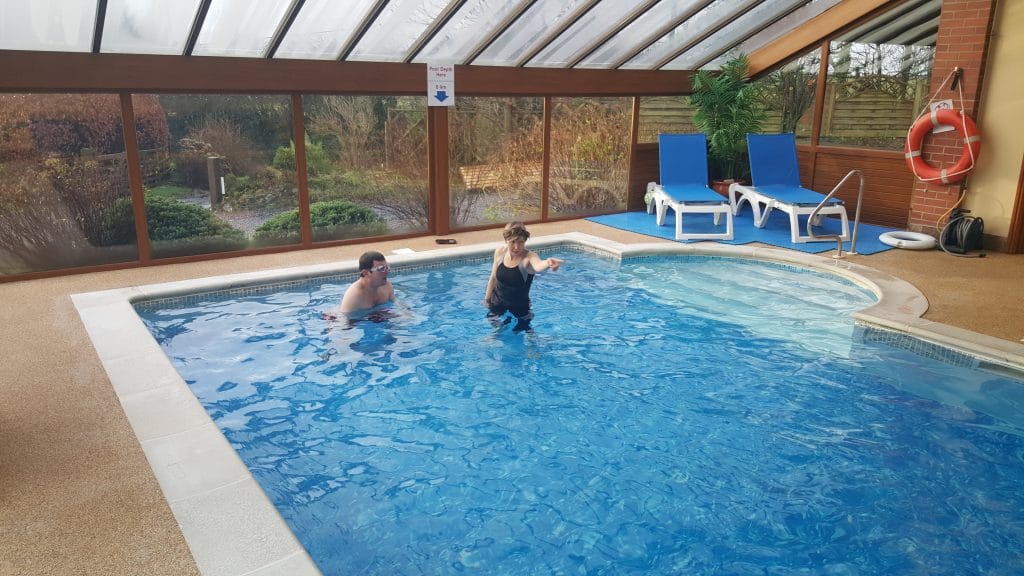 Michael from Gloucestershire came for our residential course as a non-swimmer with fear of water.

After each of his 8 x 45 minute lessons with Cheryl and Ian, Michael took notes to help him process his new experiences…

LESSON #1 – Cheryl. “TAKE A LOOK AROUND”
Getting a good balanced posture in the water, feet flat on the bottom, soft knees; getting the mouth in the water; putting face in water – with eyes open inside the goggles “Take a look”; eyes lead the direction like in Alexander; make bubbles then without a sound; face in water up to nose, then ears;

Leading with head and allowing its weight to to take it into, then under the water;
It’s all about the weight, and where it is;

Resting on Cheryl’s arms leading forwards, legs may go up a little, then repositioning legs under body before head resurfaces, to maintain stability;

Working on breathing by the edge; making a sound and registering the point that the mouth is clear of the water; then noticing that breathing out normally, as if in air, just allows air to come out without making a point of forcing it – possibility of some small slow bubbles; then practising doing nothing – ie submerging open mouth and water just sits there and over nose and nothing (bad!) happens – no temptation to breathe in or no possibility of water going in!

Trusting the water!….to take and support you. Allowing the head to fall forward, as it has its own buoyancy and cannot sink; Ian would take my head with minimal support from outstretched arms, to show everything was going well as it should be -demonstrated with me taking his head as he launched forwards;

No need to be concerned by what the legs do as a result – they may rise up but will fall back down – no need to “do” anything ( did this again starting from kneeling in the shallow end, which felt weird to start with); when he demonstrated the momentum of falling forward in the deeper end, that took the legs up for a short while, but then they dropped back down;

Ended by reaching for the steps, starting on knees and knowing the step was there. Ian said that the breathing was working well, and I didn’t think twice about putting the head in without any preparation – said it was really good

SUMMARY:
I can’t believe I have had my head COMPLETELY under water and legs leaving the bottom, if only temporarily but moving forwards. The goggles really helped of course and eyes can stay fully open as I drop my head in!
“Trusting the water to support you- because it will – even if you do nothing.”

Using weight of head, just dropping into water, not forcing it; have a look around at the fish; thinking of leaving feet where they are so body just goes forward;

ON MY BACK!!!!! With her support, just let the weight of the head take you back, eyes going up and looking up at the ceiling; if/when they have left the bottom, legs come back down, then drop and let weight of bum/body go down, let weight of head drop forward and into water, and the upright position will naturally prevail, then head can come back up again.

Took a few goes, and head went back so water even covered ears OK

Then back on front; just letting weight of head fall forward – having a look round; adding in the arms as I come back up, “feeling the water” – they can spread out to help stabilise body into sitting in water position;

LESSON #4. IAN. “DOING NOTHING – GIVING YOURSELF TO THE WATER TO SUPPORT YOU – BECAUSE IT WILL!

Lots of talking including about Alexander. Lots of practice on my front; weight and buoyancy of the head going downwards; doing nothing: letting the head drop; leaving the legs behind;

Much less support of his arms – in fact he then just took my head and guided it; practised a deliberate manoeuvre to bring knees up towards chest just prior to rebalancing and coming back up to the sitting position;

Ian then moved a little further away, though in reach, for the same sequence – then to finish the lesson on a “high”, he went out of reach and I launched myself towards him across the pool, head completely immersed!!!

LESSON #5 CHERYL – Introducing things I can do on my own

Things felt a bit different, and not giving myself to the water so readily, but things hooked up later, with timing. Had issues with three types of goggles taking in water. Decided it was a grimace/smile at point of going in causing wrinkles which let in the water perhaps. Pool temperature was a bit lower I thought, and I decided I had indigestion from eating a large banana – all small things which were a distraction;

I said up till now, we hadn’t had any real backward steps, then Cheryl said as it was the mid point for the lessons ( 5 of 8 ), it was quite common for this lesson to have a bit of that feeling;

Worked at going to the side wall on my own: starting close by, then a little further away; same principle of letting weight of head take me into the water, then bring legs around and up as I touch the side wall under the surface (or holding on actual edge if I felt I needed to – trying to stay down below the water, arms on side of pool had less work to do as water supported me!)

Breathing was less automatic to start with today, with more bubbles, and a slight “running out of breath” feeling but then when we went back to going towards Cheryl, I was able to control/ hold breath, with no unnecessary air blown out; “look down and around at the fish” really helped focus, and made things so much smoother;

Another thing to do on my own: at the steps of the pool, letting head go down, thinking about arms, and monitoring the weight distribution and how buoyancy changed and supported me; could “float” and be held by the water;

More work on going in from the front, keeping things calm; if in doubt Cheryl said “look down” and weight of head dropping will stabilise me; then she went to the side, rather than in front of me, though still with her arms available, but it was different; she said keep leading with the head, and awareness of fingers will help to project a forward direction; we did this quite a lot; extra time today🤣

LESSON #6 – IAN SITTING DOWN IN THE WATER & BOBBING UP AGAIN

Sitting down in the water, with the head going vertically down, rather dropping in when going in on your front; seemed to be closing my eyes for some reason, breathing out unnecessarily to start with; tried it from the kneeling position which required splaying knees outwards so I could get down lower; then with feet on the bottom, kicking out legs forwards and putting heels on the bottom, meant I stayed down a fraction longer before quite naturally “bobbing back up again”; made easier when I stopped gripping Ian’s shins with my feet; had his arms available, but managed to do it independently, though didn’t stay in the “sitting” position very long

“Doing nothing” is best!

The we went back to going in on my front; letting the head drop, and only having his arms available for reassurance; then he took my head instead, though everything worked well, with me taking more time for legs and knees to come underneath;

THEN I gave my head to the water, took lots of time, and controlled righting myself and coming up, without any contact or help from Ian at all – THREE TIMES!!!!!!!!!!!

COMPLETELY ON MY OWN

Consolidating. Different goggles. Gliding. Coming in and out really smoothly like Ian does in quasi slo-mo! The water shouldnt register anything if you have slipped in and out.

Giving yourself to the water; communing with the water, like in the N Wales lake;
Using the head; doing nothing in the water; relationship with the water; don’t need to be doing anything;
Playing dead; sink to float; hanging and trying to touch floor with arms (in 3ft shallow end)
Using steps extending arms; hanging there;
Thinking behind everything; most important top of the mental list is HEAD

Teachers can observe and make us focus on the wrong thing; eg water coming to a certain level on your forehead – we’re looking for the wrong thing. I said it’s like mimicking; It’s the relationship with the water, which will support you and it will DO everything.

I was petrified to start with but Ian and Cheryl's technique is unique and gives you the understanding of how the water is there to help. I never thought I'd be able to feel relaxed but when you do it’s a marvellous feeling. I can now go on holiday with my grandson and when I get in the pool with him I will have Ian and Cheryl in my head letting me enjoy the experience. They really do take the swimming out of swimming and make the water something to be embraced not feared.
October 2019