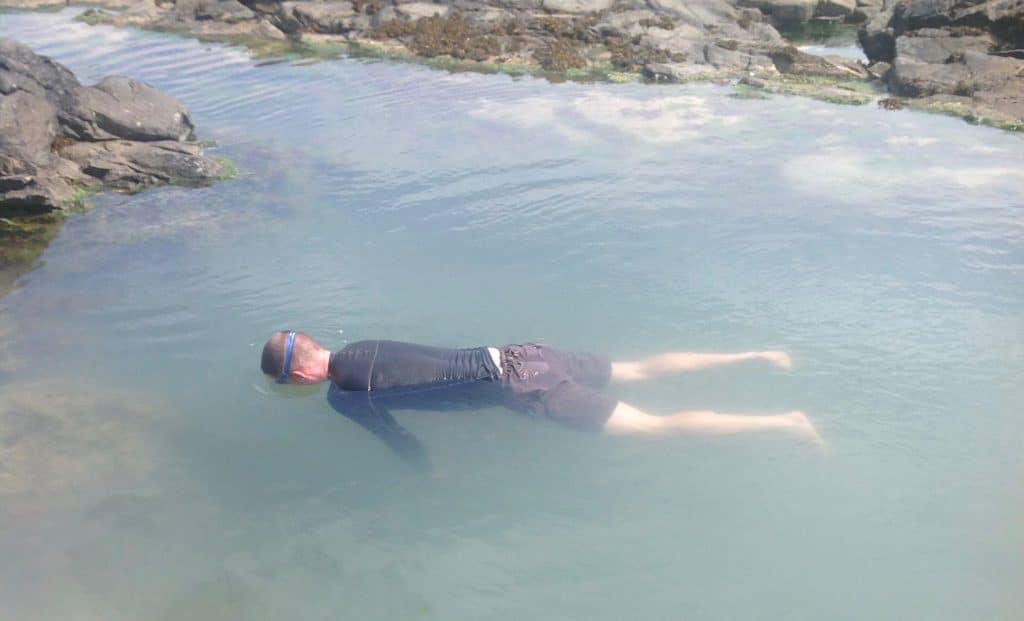 “ The healing properties of salt water have been acknowledged for centuries. But if there’s going to be healing, in or out of the water, the less we ‘do’, the better. And I think that might be the reality which is clouded by the idea of swimming.”

If I teach people they can float, the rest is up to them,” my sister in law Chie said, in a conversation about how to teach non-doing in water.

Non-doing is at the heart of the Alexander Technique, not movement but what’s behind it, not posture but prevention of postural distortion brought about by what we’re doing.

Floating, not swimming, lends itself best to non-doing. To float, you need to do nothing whereas to swim you need to do something, to go somewhere. As soon as we start moving, we may be going wrong without the first bit of recognition. When we float, if we’re doing nothing, we can’t really go wrong.

Swimming outdoors is popular at the moment. Perhaps there’s more liberation in ‘wild swimming’ than pool swimming, with its constraining man-made walls, and chlorine.  But in the sea this summer I’ve been asking myself if there may be more freedom in floating, just giving myself to the salty water, letting it support me and looking around.

The healing properties of salt water have been acknowledged for centuries. But if there’s going to be healing, in or out of the water, the less we ‘do’, the better. And I think that might be the reality which is clouded by the idea of swimming.

When you are able just to float, you calm down. You connect with the water and yourself. Your body can release and expand. You might stop holding on. Your moro reflex isn’t excited, it’s  quiet, at rest. These are the benefits Alexander work brings. If I really want to attend to the process in the water, floating not swimming gives me the best opportunity. It’s an open goal.

If you’re a non-swimmer or nervous in the water, floating freely is the thing to aim for. It may not be easy to let go at first but it’s the most important thing you’ll learn.

When in water, the less we swim, the easier it is to do less. Doing nothing in the water might not make you fitter, stronger or thinner, but the health benefits of stopping may go beyond those three.

I always swim a bit, two or three strokes at a time, to get through an open cave, avoid a jellyfish, or explore the possibility of non-doing in movement. But floating is the best thing I can do for myself in water. It might be the same for you. Perhaps it comes down to how much stopping, how much quietness, you need.

It’s almost the exact opposite of the normal experience of learning to swim....The whole experience was delightful.
June 2017