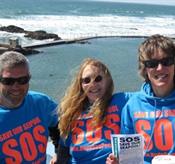 “ People who are happy in water, who have a feel for water, find it much easier to learn new movement patterns than nervous swimmers, though it can still be mentally challenging.”

I swam before I could walk’,  Rowena told me before her first of 6 lessons this week. She learned to swim with a physiotherapist in a hydrotherapy pool, as a poorly infant.  But she’d never had any formal lessons.

She loves water and swims in the Cornish sea for 8 months of the year, often for a few kilometres.  She wanted to make her strokes more efficient.

We found her easy to work with because she was relaxed, open to change and already had the most important but often elusive quality when she arrived – a feel for the water.  But despite being happy in the water and able to swim for miles at a time, she was tightening her neck and back in front crawl and breaststroke, and this was impeding her flow.

People who are happy in water, who have a feel for water, find it much easier to learn new movement patterns than nervous swimmers. But even for happy swimmers, reorganising their strokes can feel like hard work.  On day 2 she said,  ‘I feel like I can’t swim now.’  While from my point of view she seemed to sail through the process,  thinking through changes to what she’d always done automatically was mentally challenging.

During this period of adaptation,  video feedback is always useful.  ‘It feels weird but I can see how much better it looks.’

But only when she found ‘order’ in her strokes, as she put it,  could she see clearly where there had been a lack of order before.

In breaststroke her arms had been dominating her legs. There had been a conflict between her top and bottom halves.  With a free neck, she discovered a kick which gave momentum for a glide and a movement with her arms which supported her breathing position instead of interfering with it.

In front crawl she found balance in rotation with her forward arm extended, where previously she’d swum squarely in the water and pulled her arms back straight away.

She’s now able to relax her neck and let her head be supported by the water,  pointing forward, when she rotates to breathe.  Previously she’d been lifting her head,  holding her breath as her face broke the surface then gasping a bit.

When she gave herself time to let the in-breath take care of itself, to her surprise, she started to inhale through her nose.

Rowena’s only agenda this week was to find out more, and to get more out of an experience she already enjoys – swimming leisurely over distance in open water.  She’s transformed her swimming already and has the tools for continued exploration.

Helping Rowena improve her strokes was like showing a dancer a new dance, I imagine.“ Thanks to you both for the massively helpful coaching. It’ll be fab to put it into practice in a big pool .” The pool she refers to is the sea pool in Bude.

Being a typical lad, Adam was very self-conscious about having swimming lessons ... Coming to Cardigan was a final attempt to turn him into a swimmer - and what a triumph! I am eternally grateful for Ian's calmness and patience in his teaching.
July 2011