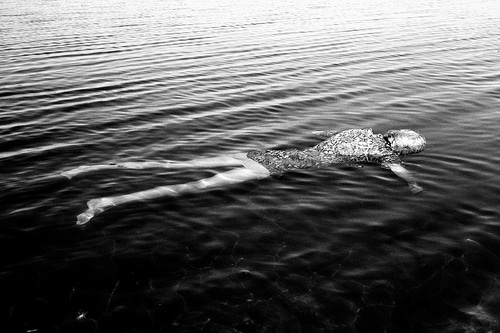 About 15 years ago I was giving lessons to Christopher, aged ten. Ten’s a bit late for a child to learn to swim and it took him a while. For several lessons, he would glide with his face in the water but I had to hold his hands. He wasn’t quite letting the water support him.

One day I asked him, ‘Christopher, do you believe you can float?‘

He was a thoughtful child and until he was convinced that the water would support him, he wasn’t going to try it on his own. When I demonstrated the skill, countless times, of lying in the water and letting it support me, he thought I was showing him some special ability, not one that was available to him; something magical, impossible.

With a bit more work, Christopher cracked it and you couldn’t get him out of the water. He was always diving down to the bottom of the pool.

Last week I worked with two women, individually. The first wanted to take the bull by the horns and just do it. An example of her courage was a sky-dive she did for her 70th birthday, 30,000 feet out of a plane. She came with this old British spirit, psyched up for success.

But with swimming, this ‘feel the fear and do it anyway’ approach wasn’t going to work. She had to approach the water without fear, a different kettle of fish. She needed to see that if she did nothing, ‘played dead’, the water would support her. Then all the problems she seemed to have with it – feeling like she was going to sink, not being able to breathe, not being able to get her feet back on the ground – would go away. They did, and it was a really different experience for her. Non-doing. But she had to work hard mentally, against her habit of life, to get it.

The second pupil was very quick to follow instructions and did some lovely swimming by the end of the week. But at first, she found it difficult to trust the water to support her. It takes some time because it isn’t something you can just do. I was asking her, like Christopher, to accept trust in something she had no experience of. Alexander wrote about ‘reasoning from the known to the unknown,’ thinking our way into an unfamiliar experience of being, one of more freedom, which our habitual tendencies get in the way of. The unknown, for people learning to swim, is the support of the water.

On the first day, when she let everything soften as she glided through the water, she was able to regain her feet calmly. But when she braced herself and held on, she wasn’t. As an observer, it’s easy to see that the difference between success and failure, in the practice of gliding and regaining the feet, is in the presence or absence of a conscious decision to let go. The physical counterpart to this decision is muscular softness. Lack of trust and calmness produces tangible, observable muscular tension. For a while, she was doing her best to give herself to the water, but not quite managing it.

‘Why didn’t that work?‘ (exasperated)

‘Because I can see.‘ (trying not to sound smug)

You can’t see what people are thinking but you can see what they’re doing and it amounts to the same thing.

She had no feeling at first of the muscular tension she was making to try to stop herself from sinking. But she started to get the feeling, once she’d made the connection between this tension and her failure to breathe calmly and regain her feet well.

She’s got it now, forever. Even if she’s had a bad day, she’ll always be able to rely on the support of the water in a swimming pool.

Learning to swim’s a mental thing. You have to think your way into an experience – floating – you’ve never had before. But it does become a feeling, which you’ll never lose. Consistency comes with time and practice and the real work is the work of non-doing. When you can do nothing in the water and stop the muscular doings of your habitual life, it is like a bit of magic.

It was so different from earlier experiences with someone shouting from the poolside, fully dressed and bone dry while I struggled in the water, usually getting nowhere.
October 2013