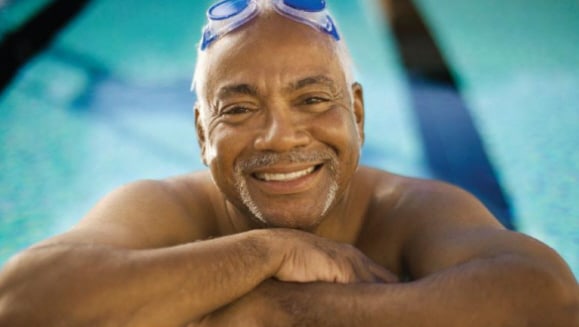 Why can so few black people swim compared to the UK population as a whole?

In this programme on BBC Radio 4, October 2nd 2009, Matt Blaize explores the commonly held belief in UK that black people can’t swim. Ian made these notes whilst listening.

All sports come easily to Matt except swimming… Is it true that “black men can’t swim”?
Role models?
Cultural – there is a need to change the message that black kids can’t swim.
None of Matt’s black friends can swim well.
Black US Gold medallist – Cullen Jones, part of relay team with Phelps, helps to counter the stereotype.
Sport England: Black Caribbean men much less likely to swim than population as a whole.

Matt wonders, Is it true that black men are not ‘made to swim’ physiologically?
Matt Bridge, Senior Lecturer in Coaching & Sports Science, University of Birmingham
Expert on human movement and human physiology.

In terms of buoyancy there are some differences and there is evidence to suggest that black men and women are less buoyant than white men and women.
Differences in bone mineral density (weight of bones)
Take average black man and average white man and you’re looking at 300grams difference in terms of skeletal mass.
But there are people in both groups that break the rule, you can get very buoyant black men and very heavy white men.
But generally black people are less buoyant than white people.
But a non buoyant person can still swim.
Lack of buoyancy is most significant at the learning phase. E.g black kid kicking with float, legs may sink. Once you take the floats away, it evens itself out.

Anecdotal note (Ian Cross, Swimming without Stress): black people learning to swim will often make up for lack of buoyancy through better direction through the water than their non-swimming white counterparts.
Also, regarding the discussion of legs sinking – it is the same problem as men’s legs compared to women’s legs. It doesn’t matter if the legs sink. A more significant measure of buoyancy is whether the head floats (some black men’s heads do float lower than white men’s). But if you use legs as a measure of buoyancy, you could just as easily say ‘men’ can’t swim.

Matt Bridge goes on to say that in the US marine corps, where non swimmers have to learn to swim, no one, black or white, has ever failed (quite stringent and vigorous) swimming test. This shows that social factors, confidence, motivation, peer group influences, are significant.

Richard Bailey, Professor of Sport and Education, School of Education, University of Birmingham, re learning sport:
It takes a lot of courage for an adult to learn to swim. Being in a group makes it more difficult. Recommends finding a specialist swimming teacher teaching on a 1:1 basis.

Matt goes to see teacher Gary Humphries (?) – He says childhood experiences can be a factor in being a non swimmer.
Says that Matt will float lower in the water rather than on the surface because he has little fat and high bone density and he will learn to use his buoyancy to great effect. “everyone can swim”. Explores relationship between height in water of head to flotation of legs.

Anecodotal note (Ian Cross, Swimming without Stress): Again, I would be more interested in how the head floats when he lets it go. I think there is too much emphasis on whether legs float when learning to swim.

Matt tried to learn aged 9. RB says this is late because time for learning key motor skills, through deliberate play, is 3 – 7 years. By 9 – 10 years, need to be honing skills, ‘practice phase’ – likely to have missed out on the key skills ‘learning through play’ stage.

For more on this subject, read Ian’s post, About black people learning to swim

Ian and Cheryl are a class act. Their residential course is brilliant and the service they offer their clients through their internet store just adds to the positive experience.
October 2013