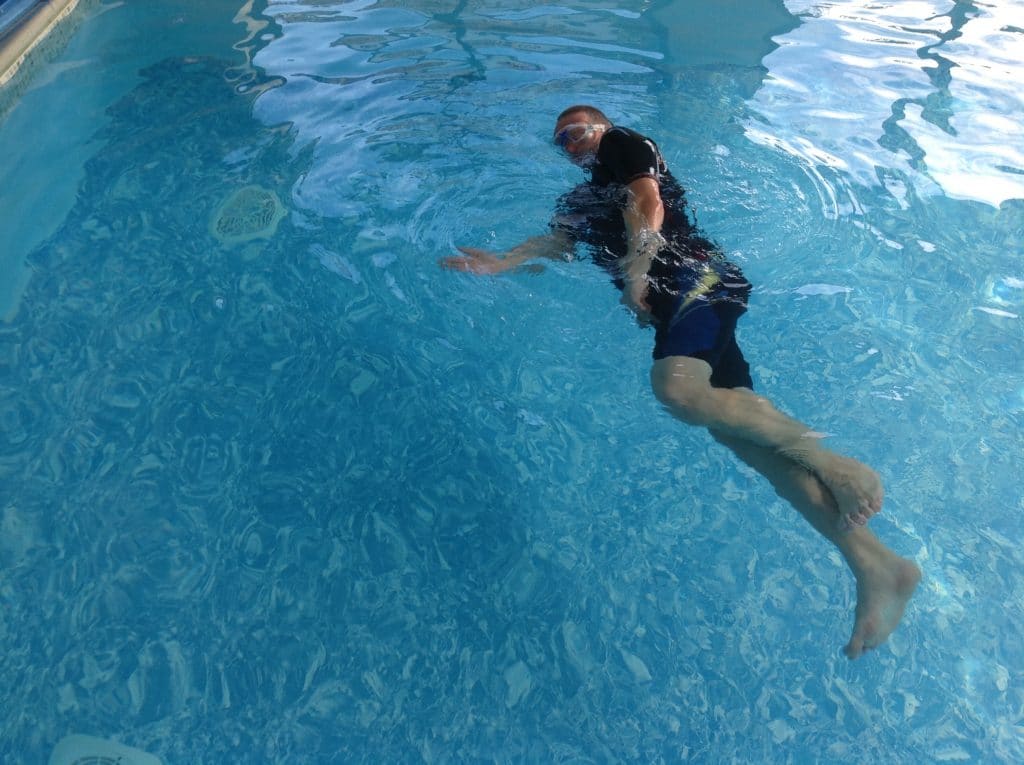 Why we should roll around like kids and strokes shouldn’t be taught too soon..

Four simple rotations are the foundations for all swimming movement and essential for water confidence. They are: rolling from back to front and front to back, in both planes.  If you can do them, you can do anything in the water. All the strokes depend on the ability to rotate in one plane or the other.

Watch kids playing in the water and you’ll see a lot of rotating. Water gives them the freedom to move in new ways. A favourite activity, related to rolling from back to front, is diving down to pick something up from the pool floor or to swim through someone’s legs.

Mums and dads love to see their kids expressing freedom and confidence in the pool. But in children’s swimming lessons there’s often an adult agenda for strokes to be mastered.  5 to 7 year olds will happily spend hours exploring underwater, swimming through hoops, or learning to make new shapes with their bodies. But the moment a movement that looks like a formal stroke is introduced, they tend to glaze over, or disappear under the water, as if trying to tell us something.

Kids learn feel for the water through play. It can be difficult to get them to see the point of learning strokes because they like to find their own way of getting about. And the idea of swimming up and down would seem to be nonsensical to them…until we train them otherwise.

Adults are generally the opposite. Adult learners would like to be able to swim up and down with reasonable ease and control and tend to go straight for this goal, usually with some difficulty. More adventurous activities that come so easily to playful kids seem scary and impossible. They might lead to a sense of disorientation, or water going up the nose (problems which kids, incidentally, never seem to get), so seem best avoided. But we shouldn’t avoid them.

Don’t focus on the strokes too early

The secret of teaching kids might be, if not leaving them alone, following their creative lead and guiding them when they don’t know how to do something they want to do and the secret of being an adult learner or teacher might be to learn from kids. Don’t focus on the strokes too early, in other words.

Here’s how to do the four rotations, in adult terms:

1. Roll from back to front by letting your bottom sink and knees bend and dropping your face into the water to look at the floor. Open out on to your tummy.

2. Roll from front to back by rolling your knees up to your chest and laying your head back to rest in the water, opening out on to your back.

3. Roll from your back on to your front sideways. Roll your shoulders, keeping your head still for as long as possible (see one shoulder out of the corner of your eye) and finally let your head roll in face down, without lifting your head, letting air out as you lie on your tummy.

4. Roll from your front on to your back sideways. Start with both arms in front. Sweep one arm back to get the rotation going. Leave the other arm in front for as long as possible. You end up with both arms by the side looking at the ceiling. Keep your head resting in the water throughout.

We were impressed by the website but nothing prepared us for the wonderful “swimming without stress” experience....It was brilliant to see Lynne overcome her anxiety about the water and to hear her talk of the positive benefits of the Alexander Technique.
November 2011