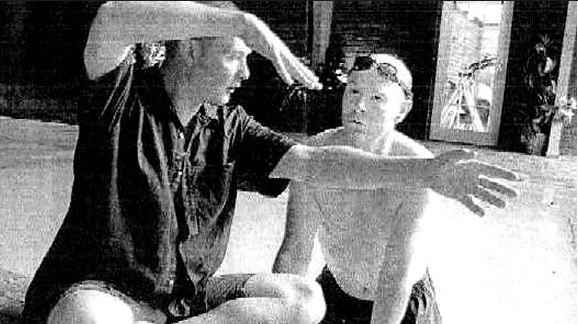 Think you can swim? Pete Chapman did too. Then he had his crawl remodelled by a lesson based on the Alexander Technique.

If memory serves, I was something of an aquatic hotshot in the womb-medley marathons, tumble turns the odd dolphin pirouette -but somehow, by the time it came to lessons in the school pool I ended up swimming widths in the shallow end with the athletically inept in fact, it wasn’t so much swimming as thrashing – head held rigidly out of the water, stiff arms swiping at the water. My only apparent talent was for clinging on to the sides. Sometimes, my fingers had to be prised free by determined instructors.

Thirty years later and I consider myself be a proper swimmer. Three times a week I plough up and down a west London pool for 35 minutes at a time. It is my regular exercise, I’m pleased with my progress from being the one most likely to drown to confident crawler. There are a couple of things that bug me, though. One, my shoulders and neck sometimes ache after swimming which is odd given that I’ve always assumed it was the perfect, impact-free exercise. Two, why is it the men and women who regularly overtake me in the pool appear to be moving so effortlessly? Almost the first thing Ian Cross, the founder of Swimming without Stress, did was film me with his video camera. When he played it back, he said, “Listen.” All I could hear was the methodical slap, slap, slap of my hands as they hit the water. I was impressed. To my mind, noisy swimmer equalled powerful swimmer. Ian gently pointed out that I was wasting energy and that it would be far better to let my hand enter the water at a graceful angle with little or no splash. Despite being a man with a powerful attachment to splashing, a few practice lengths later I could see the sense of what he was saying.

Ian himself first discovered the joy of swimming in Thailand during a year’s travelling after his A-levels. “on land, I felt slightly unbalanced, while in the water I felt graceful,” he said. “During my time at university I swam quite a lot and later on I got involved in triathlons. However, I quickly came to the conclusion that the spirit of swimming had been hijacked by the sport of competitive swimming.” it was later on, when training as a teacher of the Alexander Technique, he saw how it might help people learn to swim, As he pointed out, “Conventional approaches to swimming assume people have no-fear of water when, actually, a lot do. The Alexander Technique helps people to become aware of the unnecessary tension fear causes in their head, neck and back – this tension not only prevents freedom of movement but restricts breathing, too.”

Already, 20 minutes into our lesson, Ian was already displaying considerable reserves of patience, which was just as well as I felt my face drop when he suggested I try some swimming on my side, It appears that like many competent swimmers I was swimming too squarely through the water. Ian soon got me gliding – head remaining straight ahead, while my body swung like a pendulum from one side to another. When you think about it, cutting through the water has to be an improvement on trying to bash it out of the way. Ian seemed impressed.

No sooner had I been warmed by his praise than I started to worry about swimming too slowly. It was all very well moving gracefully, but what about my cherished fantasies of winning a gold medal in next year’s Olympic Games in Athens. After all, I’d already perfected my tearful acknowledgement of the crowd as I got down from the medal podium, a Union jack tied around my neck Superman style. Ian suggested I try a length each of my old all-action style and my newly acquired glide.

The times turned out to be almost identical, but it only took me half as many strokes when gliding. Ian was not attempting to make me go faster – he was trying to make me swim more efficiently. However, I could see this soon might amount to pretty much the same thing. In just about an hour, he had completed re-styled my swimming action. From then on, all I had to do was acclimatise myself mentally to the idea of waterborne serenity,

Actually, although Ian is perfectly happy to fine-tune the action of swimmers, many of the individual clients he teaches are complete non-swimmers. Recently, for instance, he took part in a television documentary, The Test, for broadcast in September on ITV. “Over

a course of I0 lessons I managed to help a woman progress from being an aquaphobic to a confident, competent swimmer. It was very satisfying work,” said Ian” The key of course is relaxation, part of the reason my wife, Cheryl, and I have started running our own Swimming without Stress holidays in West Wales. People can learn to swim in a beautiful part of the world. They can come for a week or a long weekend. The courses include two lessons a day and unlimited use of the pool, as well as a sauna and steam room Although I can’t predict precisely how long it will take to teach someone to swim, individuals often progress quickly,”

Something of a low-key evangelist, Ian is dedicated to introducing the masses to the pleasures of recreational swimming. Using touchstones gleaned from his experience of teaching the Alexander Technique, he coaxes and gently encourages, helping the non-swimmer and swimmer to feel more at home in the water.

Since visiting him, my trips to my local pool have turned into something rather more graceful and rather less taxing than before. In fact, I am now seriously considering ditching my gold medal aspirations for Athens 2004 completely and applying, instead, for the honorary position, of West London’s oidest-ever water baby, How could they refuse?

It was a real pleasure meeting, and being coached by you, over the 4 days in Cardigan. I appreciated your very particular blend of appreciative care and adaptive challenge, which made learning both high quality and real fun.
February 2014